We are still a long way from being able to provide the best treatment to everyone who needs it, but we can be on the verge of change thanks to virtual reality.

Few topics are hotter at the moment than virtual reality (VR). Although it has been around for decades, VR finally entered the world of consumer electronics through devices like the Oculus Rift and HTC Vive and, increasingly, headsets that can be used in conjunction with our cell phones. But VR is not just a factor in technological change: it can transform the way we deal with mental health problems.

Not too long ago, talking about psychological problems was taboo. Now, the scale of these disorders is no longer a secret. We know, for example, that one in four people will experience mental health problems at some point in their life. The ramifications of this ocean of distress are not merely personal and the socioeconomic consequences are profound.

Therefore, the form of treatment is crucial. Counseling can be effective to some extent, but the most powerful changes happen when individuals are introduced to situations that cause them suffering and learn directly to think, feel, and behave more constructively. This means leaving the consultation room and entering the real world, with the therapist acting much more like a personal trainer or leadership coach. Unfortunately, this rarely occurs: even when therapists recognize the convenience of the approach, time is scarce.

The picture, therefore, is not a good one - the major public health problem is an inability to provide the best therapies for most affected people. And yet, we can be on the verge of surprising progress, thanks to a technology that has been with us for half a century.

Virtual reality can create powerful simulations of the scenarios in which psychological difficulties occur. Suddenly, there is no need for a therapist to accompany a client in a crowded shopping mall, for example or even a tall building. Situations that are more or less impossible to build in the course of therapy - flying, for example, or even shocking events that are often behind PTSD - can be evoked with the click of a mouse. The in-situ coaching that is so effective for so many disorders can now be delivered to the consultation room, with the simulations classified with difficulty and repeated as many times as necessary.

VR offers another big advantage. Understandably, the thought of facing a difficult situation - even as part of a therapy course - can be disheartening to many people. But because it is a technology and not real, this reticence tends to disappear. We can do things in VR that we would be reluctant to try in normal life.

Despite this, not only does the psychological component of virtual therapies need to be appropriate, but the experience of virtual reality needs to be thought from scratch. The so-called VR is miles away from the immersive and revolutionary technology it can be, but when it is done correctly, it is a breathtaking adventure for users. Virtual therapies need to be as exciting as the best computer games if they are to get us back for more.

And, of course, such VR-based treatments must be tested in rigorous clinical trials. A lot of work is still needed. But, the benefits can be extraordinary. Many say that VR is a technology in search of a purpose: In mental health, you may have found one. 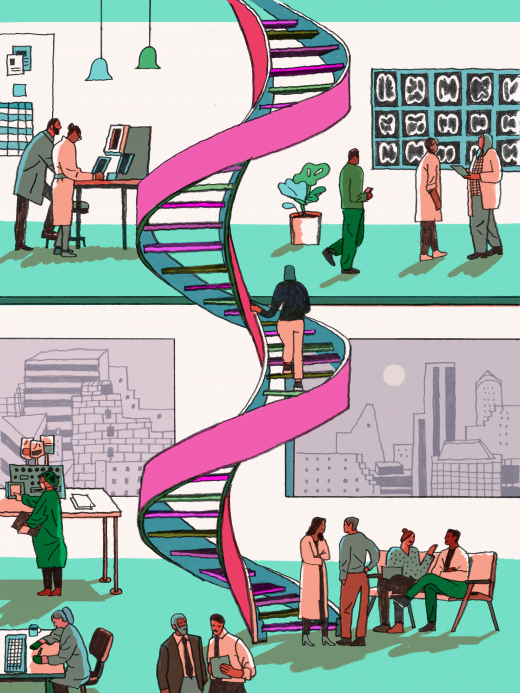 Since scientists first used CRISPR-Cas9 to edit living human cells in 2013, they have said that the possibilities for using it to treat diseases are practically endless. Only in recent years, advances in

Scientists have replicated some of the processes that cause cells to fold, curl, and ripple as they become meat. Publishing their findings recently in the journal Developmental Cell, researchers from the University of

Tips to open your doctor's office and medical marketing - Apolo English
—
How can virtual reality be relevant to mental health?
Share this