The flexible seal can take readings that normally require invasive and bulky equipment.

How was the last time you had your blood pressure checked? Probably in a doctor's office, with a bulky armband around your arm. Soon, you may just need a simple sticker on your neck, no bigger than a postage stamp.

That is the goal of Sheng Xu and his team at the University of California, San Diego. They are working on an adhesive capable of continuously measuring central blood pressure - the pressure of blood flowing through the aorta, the artery of the heart that supplies blood to all different parts of the body. This could make monitoring heart conditions much easier, as well as keeping other vital organs, such as the liver, lungs, and brain, in monitoring.

This could make monitoring heart conditions much easier, as well as keeping other vital organs, such as the liver, lungs, and brain, in monitoring. These reflections are sent back to the sensor and then to a laptop that processes blood pressure data (for now, the sticker must be connected to a laptop and a power source).

It is the first known wearable device, which can feel deeply below the skin's surface. In theory, the patch could be used at home to monitor patients over time. Because it is not inserted in the body, there is no risk of infection.

A study of the work of Xu and his colleagues, published in September 2018 in Nature Biomedical Engineering, found that the patch can continuously and precisely monitor central blood pressure when placed on different parts of the body, however, it is more effective if applied to the neck. In this study, they compared it to an efficient non-invasive device, but difficult to control, called a tonometer, in which a pressure sensor is placed on the skin. The differences between the results of the two devices were a fraction of what is considered an “acceptable” range for errors in standard blood pressure devices.

The patch is much less invasive than the current gold standard for measuring central blood pressure since it uses a catheter with a sensor that is inserted close to the heart. One of the researchers' next steps is to test their adhesive against this catheter to assess its functioning.

The device can provide much more information than is obtained using a standard blood pressure device. Xu believes that this information may be useful for monitoring patients with conditions such as hypertension or a history of heart attack.

"You don't have to wear a blood pressure device all the time," says Xu.

It also points out that because the patch can be placed close to the jugular vein, it can measure how much blood is flowing to the heart.  "This can be useful for detecting whether someone is dehydrated."

Despite the benefits that the adhesive offers, not everyone is convinced. Mohan Thanikachalam, a cardiac surgeon at Tufts University, believes that a device that monitors peripheral blood pressure may be more efficient. ” Blood pressure may have more predictive value in terms of results in the future, but as of now we don't have as much data,” he says.

Still, the adhesive can also be useful beyond the body. Xu, who was one of the innovators under 35 at MIT Technology Review’s in 2018, believes that ultrasound adhesives can also be useful for finding small cracks in complex mechanical parts, such as airplanes. 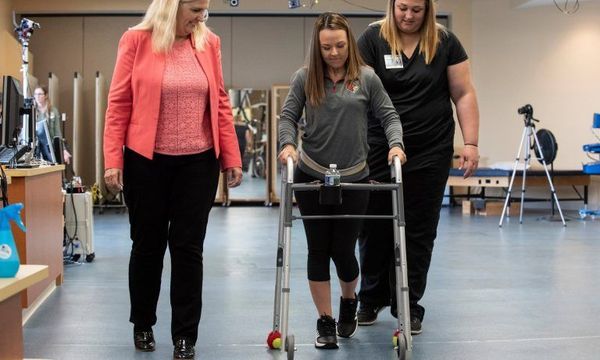 Phantom limb painful syndrome is a physiological condition that occurs in about 85% of amputee patients. It is the sensation of pain in a part of the body that has been removed in

For decades, there has been an ongoing conversation about ways we can rethink health to control costs and improve results. To that end, the Internet of Things (IoT) may be just what doctors